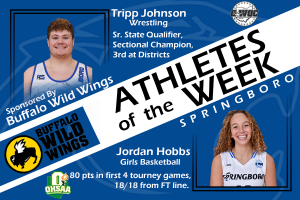 Male Athlete of the Week

Coaches Comments: Tripp is a senior state qualifier. He was also the sectional champion and placed 3rd at Districts this past weekend. He is currently ranked 9th in the state at his weight class and a team captain.

Female Athlete of the Week

Coaches Comments: Jordan played outstanding during the tournament run. She recorded 80 points during the first four games and went 18/18 from the free throw line. She had 26 points, 10 rebounds vs. Lakota West in the District Championship. She also had 20 points, 6 rebounds during the Sectional Final against Centerville. During both of those games threw up and one of those was on the floor in the middle of the game. She averaged 7 rebounds during all the tournament games.